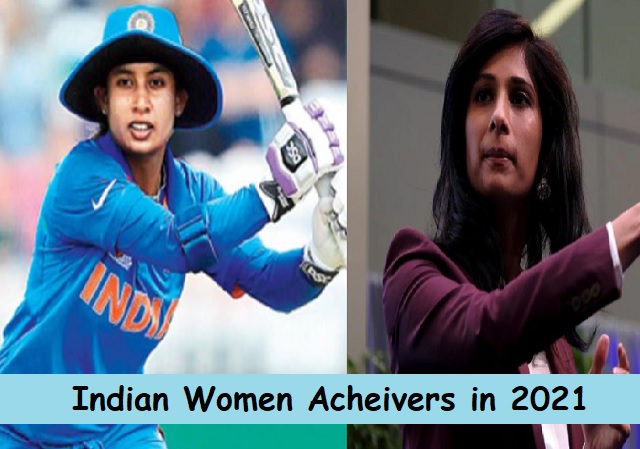 Female achievers in India 2021: As the year comes to an end, the world witnessed some whirlwind changes and one of them was largely dedicated to Indian women achievers in 2021. Effortlessly breaking the glass ceiling from sports to Ramanujan Prize for being a brilliant Mathematician, Indian women came a long way this year. Each with their own unique inspiring journey, these women from India are the examples to achievements which sometimes is believed to be impossible. The achievements, the dedication of Indian women in 2021 must be admired and their challenges must never be undermined.

In the Current Affairs section of Jagran Josh, we are bringing you such women who marked themselves in their diverse fields in 2021. Check the list below of Indian women and their accomplishments ranging from sports to beauty pageants to being on Google Doodle giving them global recognition.

Women in Sports in India 2021: Awards and Recognition

A retired Indian sprinter Anju Bobby George was awarded ‘Woman of the Year’ at the World Athletics Awards 2021 by the World Athletics. She was recognised for her efforts in advancing the sport in India as well as for inspiring more women to follow in her footsteps and achieve their dreams of being successful athletes.

Hockey Star Gurjit Kaur was awarded the FIH Women’s Hockey Player of the Year at the International Hockey Federation’s (FIH) Hockey Stars Awards 2020-21. She is an Indian female field Hockey player. Gurjit Kaur plays as a defender who also represented India at the Hockey World Cup 2018.

Mithali Raj in 2021 became the first Indian women cricketer to be conferred with the Major Dhyan Chand Khel Ratna Award by the President of India Ram Nath Kovind. Raj is the ODI as well as Test Captain of the Women’s national cricket team.

Indian women in News in 2021: Awards and Recognition in various fields

KK Shailaja, the former Health Minister of Kerala was awarded the Central European University (CEU) Open Society Prize for 2021. She was honoured for her community-based public health work and determined leadership at saving lives during the pandemic.

Indian-origin journalist Megha Rajagopalan won the Pulitzer Prize in the International Reporting category for their innovative investigative reports. She along with two other journalists was behind exposing China’s secretly built Uyghur Muslims detention camps in its Xinjiang region.

Dr. Tahera Qutbuddin, a Mumbai-born Professor, became thefirst person from India to win the prestigious Sheikh Zayed Book Award. She was honoured for her book ‘Arabic Oration: Art and Function’.

Sprinter Dutee Chand was honoured with the Chhattisgarh Veerni Award at the inaugural edition of the awards. The award was established to recognise the contribution of Indian women in different fields including sports, literature, education, law, music, history, social work and business.

Renowned poet Arundhathi Subramaniam was named among Sahitya Akademi Award winners 2020 for her poetry collection ‘When God is a Traveller’ in English.

Indian social activist Anjali Bhardwaj was honouredwith the International Anti-corruption Champions Award by the United States. The award recognised individuals who worked tirelessly, often in the face of adversity, to defend transparency, combat corruption and ensure accountability in their own countries.

9. 50 Most Powerful women in India

Fortune India released a list of its top 50 most powerful women in India in the year 2021. The Finance Minister of India Nirmala Sitharaman grabbed a top position. She was followed by Reliance’s Nita Ambani who is a Chairperson and founder of Reliance Foundation.

A Mathematician from India Neena Gupta became the fourth Indian and third woman to win Ramanujan Prize for Young Mathematicians 2021. She is a mathematician at the Indian Statistical Institute in Kolkata and won the prize for her outstanding work in affine algebraic geometry and commutative algebra.

Many Firsts for Indian women in 2021

Mountaineer Priyanka Mohite became the first woman from India to scale the tenth highest mountain in the world, Mt Annapurna.

Flight Lieutenant Bhawana Kanth became the first woman fighter pilot to take part in the parade of Republic Day 2021. She was the part of the tableau of the Indian Air Force that showcased the mock-ups of LAC- Light Combat Aircraft, the Sukhoi-30 fighter plane, and light combat helicopter.

RV Suchiang became the first-ever native woman Chief Secretary of Meghalaya. She is a 1989 batch officer of the Indian Administrative Services and her appointment was made by the State Government.

Shefali Juneja from India was elected as the first woman Chairperson of the International Civil Aviation Organization (ICAO) Aviation Security Committee. She previously served as the Joint Secretary in the Civil Aviation Ministry and used to deal with International Agreements between 2012 and 2019.

Leena Nair of Indian-origin was appointed as the CEO of Chanel, a French Luxury Brand. Leena Nair was the Chief Human Resources Officer of Unilever and she had started her career at Hindustan Unilever as a management trainee 30 years ago.

Falguni Nayar, Nykaa founder and CEO became India’s 7th woman billionaire and the wealthiest self-made billionaire. She founded Nykaa in 2012 when she was 50-years-old.

Google had paid a tribute to Subhadra Kumari Chauhan on her 117th birth anniversary with a creative doodle. She was an Indian activist, freedom fighter, and poet. Her work gained national recognition during a male-dominated era of literature.

Sarla Thukral was honoured by Google on her 107th birth anniversary. She was an Indian pilot, designer, and entrepreneur and was often best known for being the first woman from India to pilot an aircraft.

Google honoured Dr. Kadambini Ganguly on her 160th birth anniversary. She was the first woman to be trained as a physician in India. The Doodle recognised and honour her pioneering work in medical practice.