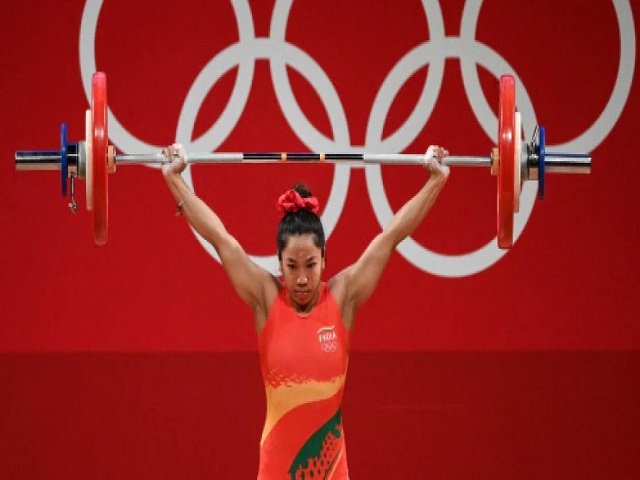 In four successful attempts, 26-year-old Chanu lifted a total of 202-kg, 115-kg in clean and jerk and 87-kg in snatch. With this win, Chanu has now become the second Indian weightlifter to win an Olympic medal. Karnam Malleswari had won the bronze medal in the 69-kg category at the 2000 Sydney Games when the weightlifting sport was first opened to women.

Taking it to Twitter, PM Modi congratulated Mirabai Chanu on her winning the Silver medal in weightlifting. “Couldn’t have asked for a happier start to #TokyoOlympics! India is elated by her stupendous performance. Her success motivates every Indian,” said PM Modi.

Could not have asked for a happier start to @Tokyo2020! India is elated by @mirabai_chanu’s stupendous performance. Congratulations to her for winning the Silver medal in weightlifting. Her success motivates every Indian. #Cheer4India #Tokyo2020 pic.twitter.com/B6uJtDlaJo

China’s Zhihui Hou won the gold medal after creating a new Olympic record of lifting a total of 210-kg and Indonesia’s Windy Cantika Aisah bagged the bronze with a total of 194-kg.

•Weightlifting: Weightlifter Mirabai Chanu bagged a silver medal in the women’s 49-kg category. Chanu lifted a total of 202-kg, 115-kg in clean and jerk and 87-kg in snatch.

•Shooting (Men’s 10-m Air Pistol): Saurabh Chaudhary scored 586 in the qualification round. He couldn’t bag a medal, finished 7th in the final with a score of 137.4.

•Table Tennis: Manika Batra won the first round against Great Britain’s Tin-Tin Ho in the women’s singles. However, in the mixed doubles round of 16, Batra and her partner A Sharath Kamal lost to the Chinese Taipei pair of Yun Ju Lin and Ching I Cheng.

•Tennis: Sumit Nagal became the first Indian in 25 years and the third Indian to win a men’s singles at the Olympics Games. Nagal won against 2018 Asian Games champion Denis Istomin.

•Double Sculls: In the lightweight men’s double sculls, Arjun Lal Jat and Arvind Singh have qualified for the repechage round.

•Judo: Sushila Devi lost to Hungarian Eva Csernoviczki. Devi was the only Indian judo athlete at the Tokyo Olympics 2020.