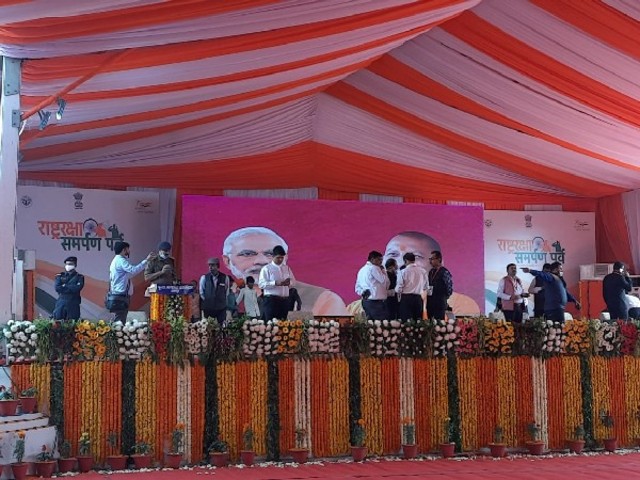 Defence Minister Rajnath Singh on November 17, 2021, inaugurated the three-day ‘Rashtra Raksha Samarpan Parv’ in Jhansi, Uttar Pradesh. The Rashtra Raksha Samarpan Parv will be held from November 17 to November 19, 2021, as a part of the Azadi Ka Amrit Mahotsav celebrations. PM Narendra Modi will also be launching several initiatives of the Defence Ministry during a grand ceremony at Jhansi Fort on November 19, which is the birth anniversary of Rani Lakshmi Bai. She is revered as the epitome of courage and bravery as well as a great national icon of Rashtra Raksha.

The Cabinet has approved the scheme of setting up 100 new Sainik Schools throughout India. Under the scheme launched during the Rashtra Raksha Samarpan Parv, 100 Sainik Schools will be set up over the next two years in each State/UT in partnership with private educational institutions, state governments, and NGOs.

The Defence Ministry will also launch a nationwide programme on November 19, 2021, for scaling up simulation training for NCC Cadets across three wings of NCC (Air, Army, and Naval).

On November 19, PM Modi will lay the foundation stone of Rs 400 crore project of Bharat Dynamics Ltd at the Jhansi node of UP Defence Industrial Corridor. Bharat Dynamics is setting up a plant for a propulsion system for Anti-Tank Guided Missiles at Jhansi Node.

Handing over of indigenously developed Light Combat Helicopter, drones/UAVs, and Advanced EW suite for naval ships to the Armed Forces

The Defence Ministry has been promoting ‘Atmanirbhar Bharat’ across the Indian Air Force, Indian Army, and Indian Navy over the last two years. Several initiatives include setting up Defence Industrial Corridors, promotion of startups under Innovations for Defence Excellence (iDEX), adopting indigenously designed and developed platforms, to name a few.

PM Modi on November 19 will launch the two Augmented Reality (AR) powered electronic kiosks at the National War Memorial to enable visitors to register and pay their tribute virtually to the fallen heroes.

The Rashtra Raksha Samarpan Parv will witness the presentation of the implementation of the NCC Border and Coastal Scheme for the past one yearon November 19. The Scheme was announced by PM Modi on August 15, 2020, during his Independence speech with an aim to expand NCC Cadets by 1 lakh in border and coastal areas. The Defence Ministry approved the scheme in September 2020.

Following this, a Committee comprising District Collectors of the border and coastal districts, Panchayat Residents, local NCC officers identified 1,283 schools and colleges (896 in border areas, 255 in coastal areas, and 132 in Taluks housing Air Force stations). The scheme has been implemented across 27 States/UT.