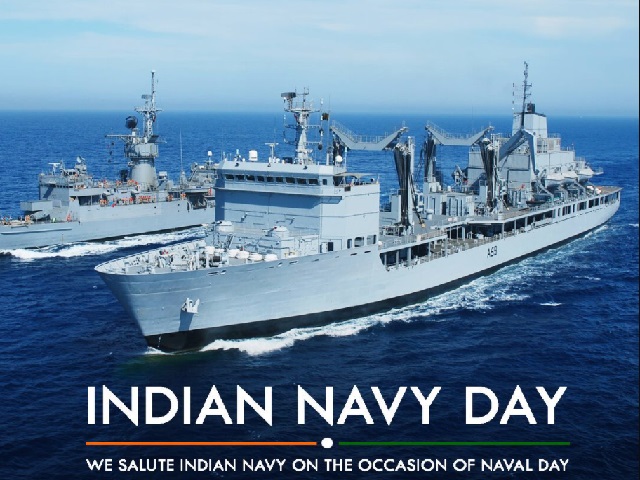 Navy Day 2021: The Indian Navy Day is observed annually on December 4 to recognize and acknowledge the role and the achievements of the Indian Navy. Navy Day is celebrated on this day to mark the anniversary of Operation Trident which was launched during the Indo-Pak war in 1971. Indian Navy Day 2021 also pays tribute to all the Navy personnel to sacrificed their lives in some of the major operations to protect the country.

Indian Navy day is celebrated with various events organized on this day. To honour the Indian Navy and acknowledge their contribution, Prime Minister Modi extended his greetings via a tweet on Indian Navy Day 2021 and mentioned the exemplary contributions of the Navy. He also mentioned Navy personnel being at the forefront during the crisis situation.

Greetings on Navy Day. We are proud of the exemplary contributions of the Indian navy. Our navy is widely respected for its professionalism and outstanding courage. Our navy personnel have always been at the forefront of mitigating crisis situations like natural disasters. pic.twitter.com/Cc4XgbMYuz

Navy Day is celebrated on December 4 to commemorate the launch of Operation Trident by India against Pakistan in the 1971 war.

During the war between the two countries in 1971, Pakistan had launched an offensive on the Indian airbases on December 3 and in response to the attack, India dispatched 3 missile boats towards Karachi, Pakistan at a maximum speed.

The Indian Navy, during Operation Trident, sank four Pakistani vessels including the PNS Khaibar which killed hundreds of Pakistani Navy Personnel. On Indian Navy Day, those who sacrificed their lives during the war are also remembered.

The Indian Navy Day highlights the success and dedication of the Indian Navy personnel. The day also gives an opportunity to educate children and Indian citizens about the victory of India in the 1971 war. On Indian Navy Day, several events take place such as air displays, marathons, tattoo ceremonies to remember the day of glory in India’s history.

1. The Indian Navy is the naval branch of the Indian Armed Forces which is led by the President of India as the Commander-in-Chief.

2. Chhatrapati Shivaji Maharaj, the Maratha Emperor is considered to be the Father of the Indian Navy.

3. The Indian Navy was established in 1612 by the East India Company.

4. It was named later the Royal India Navy and after Independence, it was reconstituted as the Indian Navy in 1950.